University of Michigan researchers have found how quantum materials emit light as though it were only a positive pulse, rather than a positive-negative oscillation. 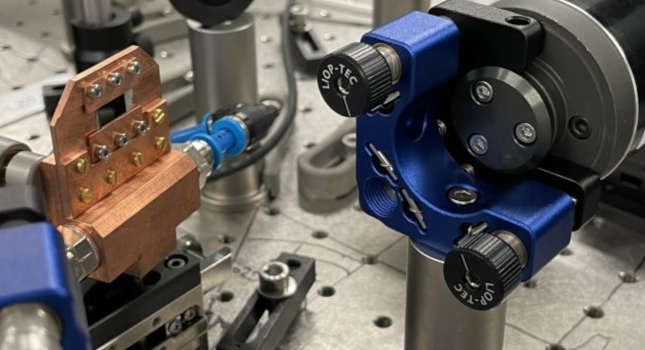 The semiconductor nanosheets in the water-cooled copper mount turn an infrared laser pulse into an effectively unipolar terahertz pulse. The team says that their terahertz emitter could be made to fit inside a matchbox. Credit: Christian Meineke, Huber Lab, University of Regensburg. Courtesy: University of Michigan.

A laser pulse that sidesteps the inherent symmetry of light waves could manipulate quantum information, potentially bringing us closer to room temperature quantum computing. The study, led by researchers at the University of Regensburg and the University of Michigan, could also accelerate conventional computing.

Quantum computing has the potential to accelerate solutions to problems that need to explore many variables at the same time, including drug discovery, weather prediction and encryption for cybersecurity. Conventional computer bits encode either a 1 or 0, but quantum bits, or qubits, can encode both at the same time. This essentially enables quantum computers to work through multiple scenarios simultaneously, rather than exploring them one after the other. However, these mixed states don’t last long, so the information processing must be faster than electronic circuits can muster.

While laser pulses can be used to manipulate the energy states of qubits, different ways of computing are possible if charge carriers used to encode quantum information could be moved around—including a room-temperature approach. Terahertz light, which sits between infrared and microwave radiation, oscillates fast enough to provide the speed, but the shape of the wave is also a problem. Namely, electromagnetic waves are obliged to produce oscillations that are both positive and negative, which sum to zero.

The positive cycle may move charge carriers, such as electrons. But then the negative cycle pulls the charges back to where they started. To reliably control the quantum information, an asymmetric light wave is needed.

“The optimum would be a completely directional, unipolar ‘wave’, so there would be only the central peak, no oscillations. That would be the dream. But the reality is that light fields that propagate have to oscillate, so we try to make the oscillations as small as we can,” said Mackillo Kira, a professor of electrical engineering and computer science at U-M and leader of the theory aspects of the study in Light: Science & Applications.

Since waves that are only positive or only negative are physically impossible, the international team came up with a way to do the next best thing. They created an effectively unipolar wave with a very sharp, high-amplitude positive peak flanked by two long, low-amplitude negative peaks. This makes the positive peak forceful enough to move charge carriers while the negative peaks are too small to have much effect.

They did this by carefully engineering nanosheets of a gallium arsenide semiconductor to design the terahertz emission through the motion of electrons and holes, which are essentially the spaces left behind when electrons move in semiconductors. The nanosheets, each about as thick as one thousandth of a hair, were made in the lab of Dominique Bougeard, a professor of physics at the University of Regensburg. The semiconductor nanosheets in the water-cooled copper mount turn an infrared laser pulse into an effectively unipolar terahertz pulse. The team says that their terahertz emitter could be made to fit inside a matchbox. Credit: Christian Meineke, Huber Lab, University of Regensburg. Courtesy: University of Michigan.

Then, the group of Rupert Huber, also a professor of physics at the University of Regensburg, stacked the semiconductor nanosheets in front of a laser. When the near-infrared pulse hit the nanosheet, it generated electrons. Due to the design of the nanosheets, the electrons welcomed separation from the holes, so they shot forward. Then, the pull from the holes drew the electrons back. As the electrons rejoined the holes, they released the energy they’d picked up from the laser pulse as a strong positive terahertz half-cycle preceded and followed by a weak, long negative half-cycle.

“The resulting terahertz emission is stunningly unipolar, with the single positive half-cycle peaking about four times higher than the two negative ones,” said Huber.

“We have been working for many years on light pulses with fewer and fewer oscillation cycles. The possibility of generating terahertz pulses so short that they effectively comprise less than a single half-oscillation cycle was beyond our bold dreams,” he added.

Next, the team intends to use these pulses to manipulate electrons in room temperature quantum materials, exploring mechanisms for quantum information processing. The pulses could also be used for ultrafast processing of conventional information.

“Now that we know the key factor of unipolar pulses, we may be able to shape terahertz pulses to be even more asymmetric and tailored for controlling semiconductor qubits,” said Qiannan Wen, a PhD student in applied physics at U-M and a co-first-author of the paper, along with Christian Meineke and Michael Prager, PhD students in physics at the University of Regensburg.