A new design for thermal actuators has been developed to help create rapid movement in soft robotic devices. 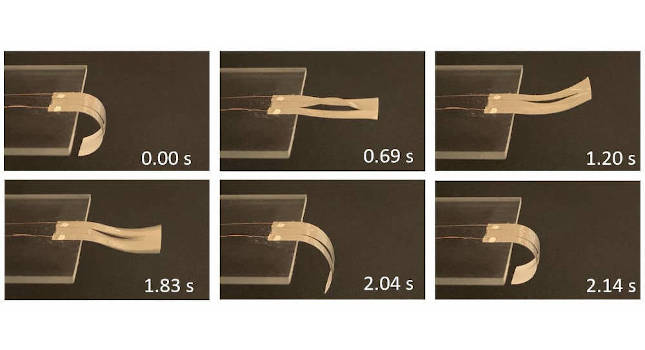 Researchers from North Carolina State University have come up with a new design for thermal actuators, which can be used to create rapid movement in soft robotic devices.

“Using thermal actuation is not new for soft robots, but the biggest challenge for soft thermal actuators was that they were relatively slow – and we’ve made them fast,” says Yong Zhu, corresponding author of the paper and the Andrew A. Adams Distinguished Professor of Mechanical and Aerospace Engineering at NC State.

Actuators are the parts of a device – such as a soft robot – that create motion by converting energy into work.

“What makes this new actuator design work is a structure with a bi-stable design,” said Shuang Wu, first author of the paper and a Ph.D. student at NC State. “Think of a snap hair clip. It’s stable until you apply a certain amount of energy (by bending it over), and then it snaps into a different shape – which is also stable.”

In the case of the new thermal actuator, the material is bi-stable, but which shape the material prefers is dictated by temperature.

The researchers layer two materials on top of each other, with silver nanowires in the middle. The two materials have different coefficients of thermal expansion, which means they expand at different rates as they heat up. In practical terms, that means the structure bends when you heat it. To demonstrate the technique, the researchers created two prototypes. One of the prototypes emulates the snapping behavior of a Venus flytrap, while the other is a “crawler” capable of moving more than one body length per second.

“Potential applications range from biomedical applications to prosthetic devices to high-end manufacturing,” Zhu said. “Any application in which you’d want to be able to move quickly, but also want to avoid rigid materials and conventional robotics.”

Next steps include developing sensor and control mechanisms that could more fully automate the actuation process, allowing it to operate more efficiently than purely manual controls.

“We’re also interested in exploring other possible materials, so that we could fine-tune the thermal and mechanical properties,” Zhu said. “This could allow us to tailor both actuator speed and force.”