Scientists have developed an energy-efficient and cost-effective process to produce butyric acid from biomass. 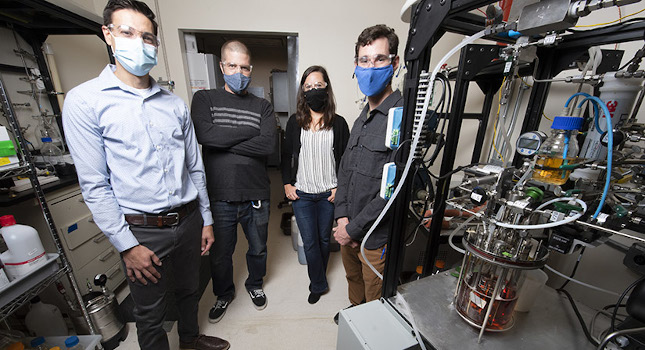 NREL scientists Eric Karp (left), Davinia Salvachua, Jeffery Linger, and Patrick Saboe have developed an energy-efficient and cost-effective process to produce butyric acid from biomass, which can be used as a precursor for renewable diesel and jet fuel. Courtesy: Dennis Schroeder, NREL

Scientists at the National Renewable Energy Laboratory (NREL) developed a fully integrated process to produce a promising precursor for diesel and jet fuel from lignocellulosic biomass, and for less expense than the selling price of the same material from petroleum.

The process established by NREL researchers is energy-efficient and results in a 50% reduction in greenhouse gas emissions compared to traditional biological production routes.

“The production of fuels from biomass is critical to diminish our reliance on petroleum and build a sustainable bioeconomy,” the researchers noted in a new paper outlining their work.

The paper, “Process intensification for the biological production of the fuel precursor butyric acid from biomass,” appears in the journal Cell Reports Physical Science.

In undertaking the research, the scientists evaluated microbes already able to produce butyric acid from biomass sugars. Very few have been studied for industrial applications. They considered two bacteria—Clostridium tyrobutyricum and Clostridium butyricum—that are able to ferment the two primary lignocellulosic sugars, glucose and xylose, and generate butyrate, acetate, carbon dioxide, and hydrogen as major products.

Using corn stover as the biomass, the researchers compared the performance of the two bacteria and determined C. tyrobutyricum better able to produce the precursor. Researchers further developed an advanced fermentation process  wherein butyric acid is continuously extracted from the fermentation vessel. This process—termed by the authors hybrid extraction distillation – in situ product recovery (HED-ISPR) process—showed a “promising path” for converting biomass to butyric acid as a chemical intermediate for the production of renewable fuels.

Given these positive results, researchers have begun scaling this process up as a step toward establishing an economically advantaged commercial route of butyric acid production. Ultimately, researchers plan to expand on this pathway to demonstrate an economically feasible route from biomass to renewable diesel and jet fuel.